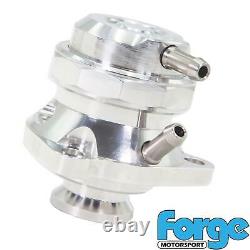 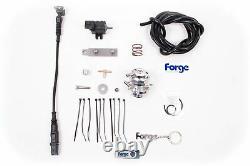 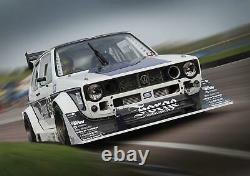 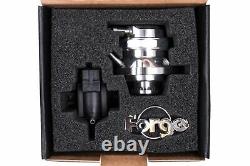 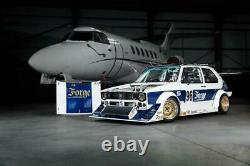 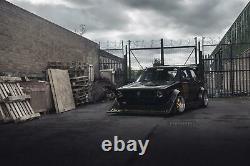 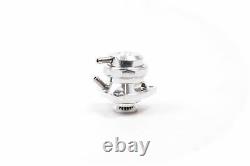 FMDVR60R - Forge Recirculation Valve Kit for N18 Mini Cooper S R55 - R60 Peugeot 208 RCZ. Forge Motorsport Recirculation Kit for Mini Cooper S's (R55 - R60) with the N18 engines and Peugeot 208 and RCZ THP. See the compatibility section for more information. Designed specifically for the BMW/Peugeot N18 engines, (Cooper S 2011 onwards, JCW Cooper S 2013 onwards, R58 Coupe 2012 onwards, Peugeot 208 GTi late 2012 onwards includes the Sport model, RCZ THP 156 & 200 2011 onwards). This product is either recommended where the boost pressure has been increased by an ECU software upgrade or simply as a solution to the many failures that have occurred. The most common complaint on the OEM solenoid valve is a split diaphragm preventing the valve from opening fully, or not at all. This doesn't always result in a check engine light as the valve can still be blown open by the boost pressure. We have seen many valves with this problem (see image above). The other problem is that diaphragm retaining ring is made from very thin plastic that goes brittle with heat cycles, and eventually fails. This prevents the diaphragm from sealing with the same problems as mentioned above. This particular failure also results in the valve falling apart upon removal from the turbo, though in extreme cases bits of plastic can enter the turbo and destroy it. Our alternative is a fully engineered solution offering both significantly improved reliability. Our valve is piston based , with no diaphragm to fail, and of all aluminium construction, it replaces the original unit with a pressure/vacuum operated piston valve that still also retains the desirable OEM ECU control over valve actuation.

Blow Off Adaptor Plate For 2007/8 Cooper S Turbo only. Blow Off Valve N18 Engines Cooper S 2011 On, JCW Cooper S 2013 onwards. Forge Motorsport was founded in 1996 with the simple ideals of innovation, clever design, and manufacturing to the highest quality. Our mantra is the BEST customer care and after service worldwide. In doing this, we have developed the largest range of replacement aftermarket valves, intercoolers, and actuators in the world.

Utilising a state of the art in house CNC machine shop, and a highly skilled team of dedicated engineers and fabricators, we supply Forge branded product worldwide, to our sister companies Forge USA in Orlando, and Forge Asia in Taichung Taiwan. Proudly stating'Made In Great Britain' on all our products. With all this knowledge at our disposal, we are honoured to supply the leading names and race teams in the world of Motorsport including: F1, WRC, Rally X, and Le Mans. We also supply several OEM manufacturers. We offer a lifetime customer service on all our products with a no hassle service promise.

You can be sure these products are... The item "Forge Recirculation Valve Kit for N18 Mini Cooper S R55 R60 Peugeot 208 RCZ" is in sale since Tuesday, May 28, 2019. This item is in the category "Vehicle Parts & Accessories\Car Tuning & Styling\Air Intake & Induction\Dump, Bypass & Blow-Off Valves".

The seller is "performance-fulfillment" and is located in Pewsey. This item can be shipped worldwide.